How to Finance an ADU

The Terner Center and Center for Community Innovation Report on ADU Potential in California released what they see as the challenges to broad ADU adoption. Despite ADU permits being on the rise, there are no mortgage specific products for ADU’s. If homeowners can’t get financing, there won’t be mass adoption.

The following is an excerpt that directly addresses the issue of ADU financing. The entire 21 page report can be found HERE.

These are the current ways to finance an ADU. 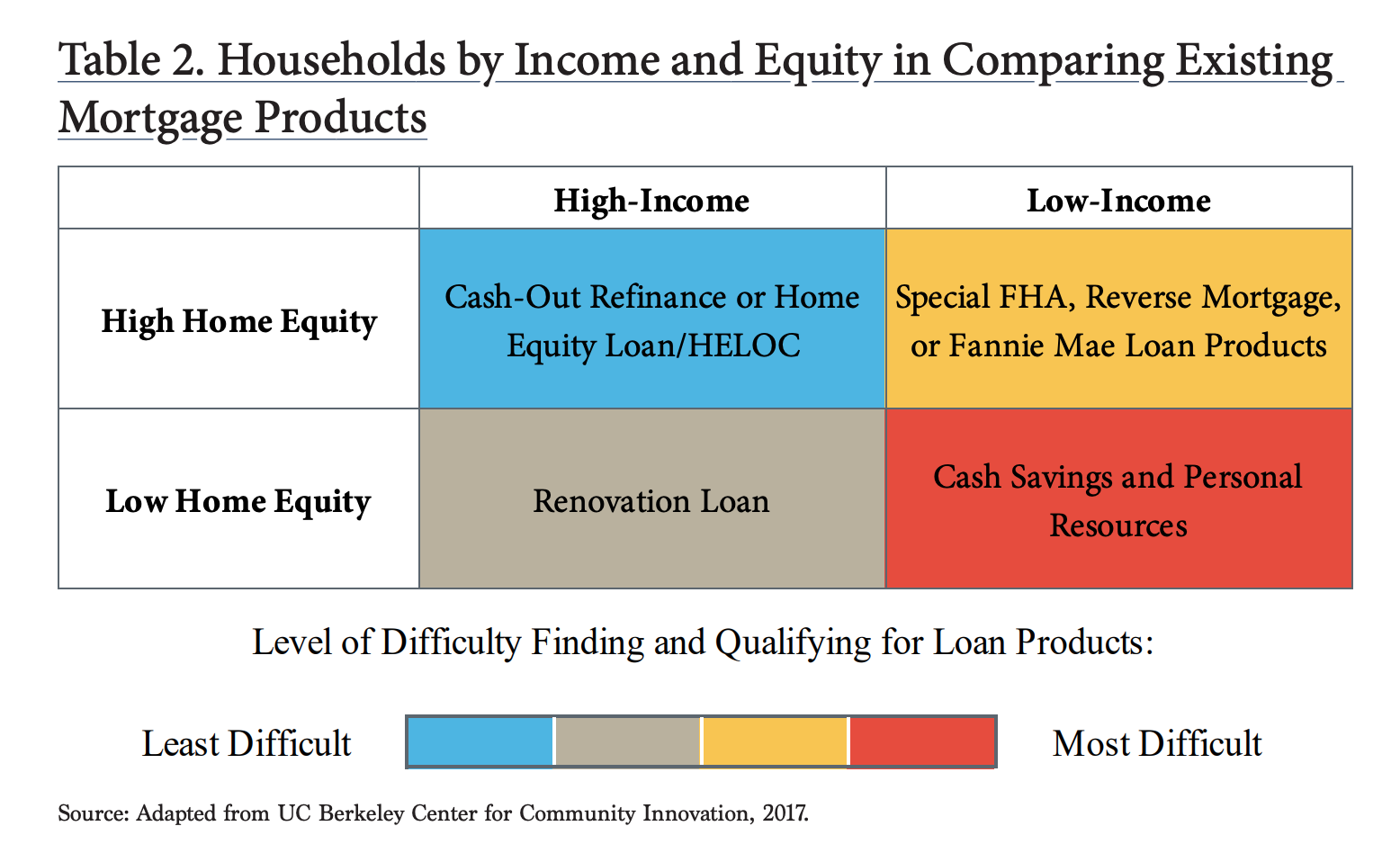 “Fannie Mae, Freddie Mac, and the Federal Housing Administration (FHA) are responsible for the large majority of mortgages for 1-4 unit structures.

Homeownership purchase and refinance has remained relatively healthy during the recent economic downturn due to the Federal Reserve Bank’s unprecedented infusion of capital into the mortgage markets, enabling historically low interest rates.

Yet, absent a homeowner being able to document an existing ADU with a year or more of rental income, current government-backed mortgage programs do not allow underwriting against unrealized rents. In the context of some very limited pilots, Fannie Mae has offered to waive their requirement for in-place ADU tenants in exchange for a variety of fairly onerous risk-mitigants, including third-party corporate guarantees and/or professional property management.

Expanding these kinds of waivers—or enabling ADU-specific construction lending programs—will require leadership from Fannie and Freddie’s regulator, the Federal Housing Finance Agency (FHFA), which has typically focused on restraining the scope of Fannie and Freddie’s innovation.

California policymakers are actively exploring other financing options. AB 69 by Assemblymember Phil Ting would create the Help Homeowners Add New Housing Program to assist homeowners in qualifying for loans to construct additional housing units on their property, including ADUs and JADUs.

In addition to creating new financial tools specifically for ADUs, allowing for single-family parcels to be split in order to sell a newly constructed ADU would also help facilitate more ADU development.

By creating a separate parcel entirely for new ADUs, a prospective resident of that ADU could purchase the lot with or without the improvements and secure conventional financing via a home construction or purchase loan, and take advantage of historically low interest rates to do so.

SB 1120 currently proposes to allow for ministerial single-family lot splits for the purpose of facilitating up to two newly constructed units on existing single-family parcels. However, as we have noted here, the bill’s uptake may be significantly constrained by its deference to local design and zoning guidelines.

Moreover, the success of this legislation will also likely hinge on the degree of public awareness of this new law and the degree to which it is embraced by city officials and housing advocates.”

Written by the ADUROI Team, to help you understand if an ADU makes financial sense.